Immigrant rights advocates were met with vociferous opposition from anti-illegal immigration activists, who shouted “Thank you Trump” and “Trump All The Way” as they spoke a couple feet away.

Yesterday President Trump signed several executive orders that will authorize the Department of Homeland Security to begin construction on the promised ‘Border Wall’ and cut federal funding provided to cities that declare themselves sanctuaries to undocumented immigrants.

“To our immigrant community … during the elections it was only a threat that our families could be separated. Today that threat is crystallizing into a reality. All the significant efforts that we have made on the defense of our immigrant families and our brothers were done away with by Mr. Trump yesterday with a signature.”

Trump is also expected to restrict the flow of refugees from the Middle East, primarily from war-torn countries like Syria, according to USA Today.

“[Trump’s] made it very clear that he’s going to focus on criminal aliens,” Hvidston said. “This focus will make our community safer. It will bring more security to our cities, our state, and our nation.”

Immigrant rights advocates, however, are skeptical of Trump’s intentions to curtail immigration. ICIJ Executive Director Javier Hernandez is concerned over the re-implementation of ICE’s Secure Communities Program and the expansion of 287(g). Under these initiatives, ICE collaborates with local police agencies to apprehend immigrants and train officers to engage in federal enforcement.

“These programs have failed and have targeted the wrong people,” Hernandez said. “Trump has proved that he’s willing to conduct mass deportations to break families apart.”

Nathan Toro of San Bernardino thinks immigrant rights advocates are “empty minded” and fail to acknowledge the instability at the border.

“We need to help teach people about the dangers of illegal immigration,” Toro said. “Liberals don’t understand the real reason why they come here. There’s a lot of danger coming from the cartels.”

Emanu El Rabbi Hillel Cohn, who fled along with his family from Nazi Germany before the beginning of the Holocaust, hopes leaders of all faiths can work, “toward a common wisdom to stop deportations and work for compassionate, immigration policy.”

“Let us go forward as brothers and sisters knowing that we are doing the right thing,” Cohn said. 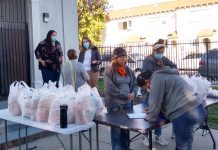