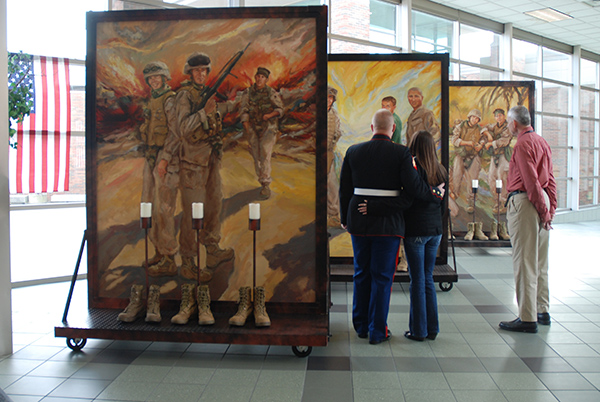 Crafton Hills College (CHC) will host the Lima Company Memorial “The Eyes of Freedom” tribute to the military on campus, April 10-12. This traveling memorial comprises 23 life-sized portraits of the fallen Marines and Navy Corpsman of Columbus, Ohio-based Lima Company, 3/25, one of the most heavily engaged units for Operation Iraqi Freedom. 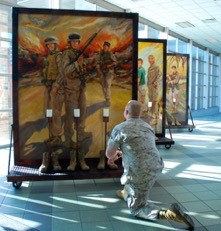 The exhibit will stand in the Crafton Center and will be open for viewing from 9 a.m. – 6 p.m. on April 10 and 11 and from 9 a.m. – 3 p.m. on April 12. The public is invited to an opening celebration on Tuesday, April 10 at noon in the CHC Quadrangle. There will also be a Veterans Resource Fair on Thursday, April 12 from 11 a.m. – 3 p.m. in the Quad. Exhibitors include Department of Veterans Affairs, Women Veteran Unity Group, CalVet, Goodwill of SoCal, and many more.

New this year, the memorial also includes a life-sized bronzed sculpture of a serviceman seated with head down, his face depicting emotions of the internal Silent Battle, as the touchable work is aptly named. He represents our nation’s veterans who struggle with suicide and post-traumatic stress, as they navigate life after combat.

Additional information on the memorial can be found at www.eyesoffreedom.org. Crafton Hills College is at 11711 Sand Canyon Rd., Yucaipa. Parking fees will be waived during the exhibit.

The Eyes of Freedom: Lima Company Memorial was created as a result of Ohio artist, Anita Miller’s vision, in which she saw the finished memorial and felt she was being asked to create it. With the help of the families of the fallen and the returned Marines of L3/25, the work was created and unveiled in the Ohio State House Rotunda in 2008, as the vision foretold.

Although the paintings in this Memorial specifically depict the 23 fallen Marines from Lima 3/25, it has become much more. The mission of the nonprofit, Eyes of Freedom Traveling Memorial is to honor the service and sacrifice of all who answer our nation’s call. Behind each portrait one feels the spirit of the thousands of men and women who have served our country, in every branch of the armed forces, not forgetting the returning veterans now suffering from post-traumatic stress.

This traveling tribute is supported by a board of directors consisting of retired military, business men and women and clergy. The full time touring team has a personal connection to the men in the paintings; Mike Strahle is a Purple Heart recipient who fought alongside these men and was badly injured in one of the attacks. Sean Flaharty was personal friends of the fallen and helped support Anita as a volunteer for years before becoming part of the touring team. Both men offer personal insight into the history and experience of this powerful memorial.

The Eyes of Freedom Memorial’s exclusive transportation provider is R+L Carriers, Inc. based in Wilmington, OH. R+L is a leading less-than-truckload (LTL) freight transportation company, providing guaranteed, day-definite regional and transcontinental service through a network of more than 100 service centers in the United States, Canada, Dominican Republic and Puerto Rico.

Sample collection for COVID-19 testing to be held in Victorville Apr. 2