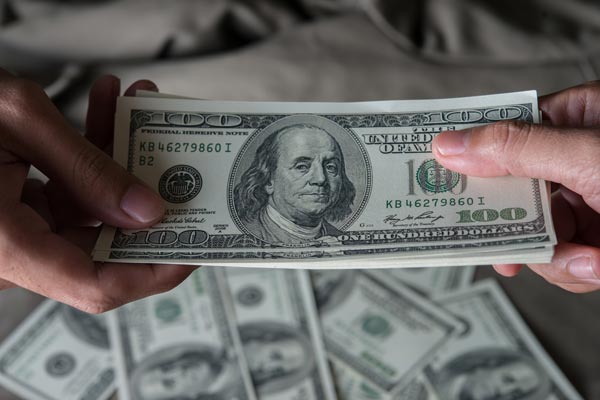 The Economy. What a mess. First, the almost $22 trillion indebtedness to high unemployment to great poverty. To the immense entitlements and the even greater military budget that makes us protective of countries throughout the world.

We are a Republic not a Democracy. That means our government is obligated to be responsible for the needy, the elderly, the poor, the handicapped, the immigrants, the veterans—on and on.

I was astounded the other day when I read that 40% of our citizenry live below the poverty level.

My astonishment continued when I read that a high percentage of seniors must live on Social Security. No other retirement.

Here are some statistics that will blow your mind. President Trump gets $400,000 per year; Vice President Pence receives $230,200. Both also receive a great health insurance stipend.

Members of the House and Senate are each paid $174,000 plus benefits.

Only 1 (one) percent of Americans are described as millionaires. I know many more people living in poverty than I know living in mansions.

In fact, most of my senior friends go to Senior Centers, attend church, eat at Fast Food restaurants and scrimp to pay for their food, prescriptions and insurance bills.

National Commander of the Salvation Army is William A. Roberts. According to the Better Business Bureau, he was paid $126,920.

I assume that these statistics as per Dr. Vroom’s article are relatively accurate. I believe they speak for themselves.

Salary based on education is mind blowing. At age 25 and over without a high school certificate, averaged only $519 per week.

This is compared with $698 for high school graduates. College graduates earned $1,270 per week. College graduates with an advanced degree earned a median average of $1476 each week. Last year, 2016, Wall Street banks gave out $26.7 billion dollars in bonusses to their 165,200 employees. “That amount would be enough to more than double the pay for all 1,085,000 Americans who work full-time at the current federal minimum wage of $7.25 per hour.”

The views of Bernie Sanders have certainly gotten the attention of millions of American citizens. Including me.

He recently spoke at Liberty University in Lynchburg, Virginia. While using a phrase he often uses, he said, “There is no justice when the top one-tenth of one percent own almost as much wealth as the bottom 90 percent.”

He further declared that the injustice prevalent in the U.S. was “when 58 percent of all new income goes to the top one percent.”

Medicaid and Medicare are significantly involved in our economy. It is common knowledge that our President and Congress are planning on giving millionaires a great tax break.

Massachusetts Senator Markey says, “They will get 33 billion dollars, based on the Republican Health Bill.” A great part of their taxes is used to pay for entitlements for the needy families in our country. That is primarily for Medicaid. The main criterion for Medicaid eligibility is limited income and to be needy.

In 2008, 62.9 million Americans were covered by Medicaid. This included children, pregnant women, disabled and seniors. The cost to our government was $295 billion dollars. It is much more today. Obviously to cover the cost, paid by wealthy tax payers, the coverage must be cut back.

Medicare is totally different. It serves people over 65 primarily, whatever their income and younger disabled and dialysis patients. Medical bills are paid for from trust funds which those covered have paid into. It is basically a Federal program. There are five (5) different types of Medicare. Please beware of the differences and choose the one that meets your needs.

Medicare Part A is the part of Medicare coverage that covers major illnesses and end-of-life care issues.

Medicare Part B is a type of Medicare that covers normal doctor’s visits and other minor issues which, could end up becoming very serious.

Medicare Part C is also known as the Medicare Advantage Plan. This plan is meant to help those that can afford private insurance.

Medicare Part D is very much needed by many individuals, due to the high cost of prescription drugs.

Medicare Medigap is a policy that can help cover any co-pays, deductibles or other expenses not covered by the normal Medicare programs