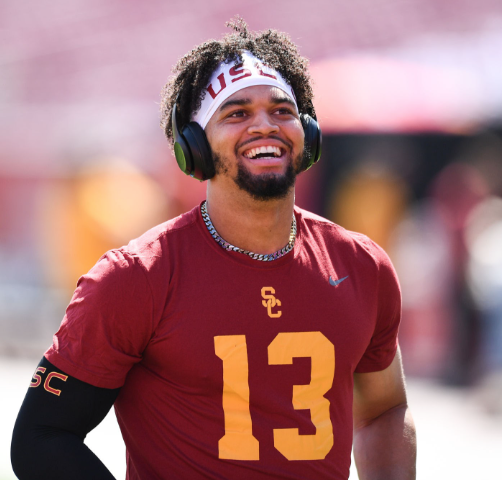 After a season full of dimes, touchdowns, and improbable improvisation acts, Caleb Williams earned himself the most prestigious award in all of college sports; the Heisman trophy. What Williams did this season was nothing short of spectacular and will be remembered for years to come as we watch and see what other feats he is able to accomplish throughout his career.

Williams came into the season under a lot of fire after he transferred from Oklahoma with head coach Lincoln Riley to USC. Many people disagreed with or disliked his move and it seems Williams dad may have questioned it himself based on Williams Heisman interview. But, the move was made, and Caleb Williams was ready to achieve one of his many career goals by not just winning meaningful games, but also winning the Heisman trophy.

Williams winning the Heisman trophy wasn’t expected by many, as last years winner Alabama QB Bryce Young and former finalist Ohio State QB C.J. Stroud were much more expected to take the award home. Williams Heisman campaign would begin with a relatively easy non conference and start or conference play schedule that, while leading to a 6-0 start, didn’t turn too many heads considering the competition he was facing. Then came the first game vs defending Pac-12 champion Utah. Williams had a nearly perfect game, throwing for 381 yards, 5 TD’s, and 0 INT’s. USC did lose that game but Williams’ offense putting up 42 points kept his Heisman hopes alive. After the bye week, Williams would lead his offense to scoring outbursts of 45, 41, and 55. With those incredible weeks now behind him, it was time for his first crosstown rivalry.

The college football worlds eyes were watching as Williams was ready to do battle with another Pac-12 heisman hopeful; UCLA QB Dorian Thompson-Robinson, better known as DTR. Williams was able to out duel DTR and UCLA, throwing for 470 yards, 2 TD’s, and an ultra rare 1 INT. Williams had finally picked up his first statement win of the season, and this is when Heisman talks kicked into overdrive.

The next week would see Caleb Williams facing another ranked team in Notre Dame. Many thought that Notre Dame would have the talent defensively to be able to at least neutralize Williams but, looking back now, they never really had a chance. Williams showed off his running game, unselfishness, game-managing ability, throwing for 232 yards on a near perfect 18/22 completion rate with, as usual, 0 INT’s. Williams would break out the iconic Heisman pose after a rushing touchdown, and just like that he was the odds on favorite for the Heisman trophy going into the PAC-12 Championship game. While the championship game rematch vs Utah didn’t go USC’s way, it’s important to note that Williams was hindered by injuries to his leg and fingers that eliminated his ability to scramble and helped Utah get enough stops to win the game. The Heisman voters clearly also realized this, and the loss didn’t ruin Williams chances at the award.

Ultimately, the four finalists were all QB’s. C.J. Stroud, Max Duggan, and Stetson Bennet all were next to Williams in New York for the ceremony this past weekend. Despite being the only QB in the room not in the CFP, as Williams addressed with a comical “can’t win em all” line in his speech, Williams won the Heisman trophy and secured a record-breaking 8th Heisman for USC.

Like Williams said, however, his job is not finished. He’ll look forward to the New Years 6 bowl game vs Tulane to start off 2023, and then come back next season looking to finish what he started, and achieve another one of his career goals by winning a national title.