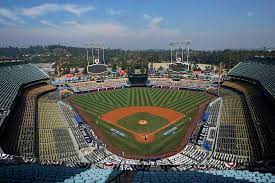 The MLB All Star Game is in an iconic venue this summer: Dodger Stadium. All of the MLB’s biggest stars will have the brightest of lights shining upon them during 2022 All Star week/weekend. The starting roster for both the American & National League are here, so let’s take a look at who will be in LA for the summer classic.

Let’s start with the AL. At catcher, Alejandro Kirk gets the nod. Kirk has burst onto the scene for the Blue Jays this season, batting over .310 while playing solid defense behind the plate. He is the first Blue Jays catcher to ever be #1 in the All Star fan voting. Moving over to first base, Kirk’s teammate, Vladimir Guerrero Jr. gets the nod. Guerrero Jr also won the ASG MVP last season, however many fans are arguing that Mariners first baseman, Ty France, should have got the nod. However, Vladdy’s popularity in the MLB world propelled him to a still well deserved starting nod. At second base, Astro Jose Altuve will start. There are sure to be many boos at Dodgers stadium for Altuve, who obviously is a villain there due to the Astros cheating scandal during the year they beat the Dodgers in the World Series. This will be quite the interesting storyline to follow throughout the weekend. At third base, Rafael Devers made a comeback in the final stage of fan voting to take the spot from Guardians star Jose Ramirez. Devers is now in his second consecutive All Star game, and has continued to contribute great things for his Red Sox. At shortstop, White Sox star Tim Anderson will start. Anderson has been consistent all year long, batting over .310 while also swiping double digit bags. Expect him to be put at the top of the order when lineups are revealed. At DH, none other than reigning MVP Shohei Ohtani gets the nod. However, Ohtani also was named a pitcher and will most likely be promoted to starting pitcher, meaning Yordan Alvarez of the Astros could possibly take Ohtani’s spot, so the two MVP candidates both will get their shine in LA. Lastly, the outfield for the AL will consist of MVP candidate Aaron Judge, Angels superstar Mike Trout, and Judge’s fellow Yankee Gincarlo Stanton in what is one of the most stacked group of outfielders we’ve seen in an All Star Game. AL pitchers and reserves can be found on MLB.com, and will most likely change due to injuries that arise or the need to rest for some players.

Now for the “host” league, the National League. At catcher Cubs veteran Wilson Contreras gets his third career all star nod, thanks to his 13 HR’s and excellent work behind the plate. At first base, a familiar face, Paul Goldschmidt will start. The veteran 1B is a dark horse MVP candidate, as he is in the top 5 in the league in most majors statistical categories. Dodger fans have seen him do a lot of damage against their home club, so expect a warm welcome. At second base, it’s a guy that just makes baseball look fun, Jazz Chisholm Jr. Chisholm is part of the new generation of baseball that simply doesn’t care what the haters think. He goes out, plays well, and does whatever crazy, entertaining celebrations he wants. A well deserved first all star game bid for the Miami Marlin standout. At 3rd base, Manny Machado of the Padres will start. In the absence of his co-Star Fernando Tatis Jr, Machado has had an impressive first half of the season, and has helped keep his team in the playoff race. At shortstop, Dodger Trea Turner will start in front of his home fans. The speedster has continued to contribute for LA, and is an All Star for the second time in his career. Closing out the NL starting lineup is the outfield, which includes young superstar Ronald Acuna Jr, LA Dodger Mookie Betts, and former Dodger Joc Pederson, now with LA’s division rival, the Giants. The DH for the NL is reigning MVP Bryce Harper, but William Contreras of the Braves will take his spot due to injury. Like the AL, the full roster and pitching staff can be found on MLB.com, and may change due to injuries and requests from teams to have their players rest.

There you have it, your 2022 MLB All Star Starters. These rosters are stacked with the leagues best players and they should put on a Hollywood level show for the fans. The ASG will take place July 19, and the list of participants for the HR derby the Monday before the game will soon be announced as well. Congratulations to all the All Stars and we can’t wait to see what this years Summer Classic has in store.