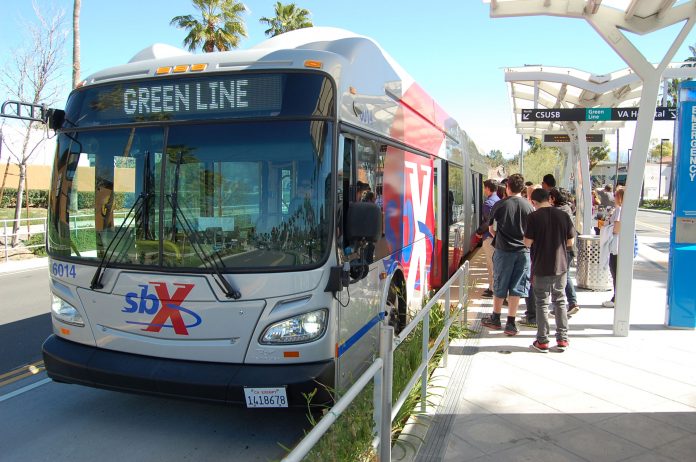 Omnitrans launched its sbX green line service in Loma Linda and San Bernardino on April 28, 2014, as one of the first bus rapid transit (BRT) lines in the nation.

The sbX BRT line travels a 16 mile-corridor through San Bernardino and Loma Linda and has 5 miles of dedicated bus-only lanes. There are 16 stations and four park-and-ride lots. The sbX fleet of 15 natural-gas-powered, 60-foot articulated vehicles offer onboard Wi-Fi, power outlets, interior bike racks, and space for two wheelchairs.   Travel time is about 20 percent faster than local bus service, due to fewer stops, dedicated lanes and transit signal priority.

The sbX green line was funded by a combination of federal, state and county funds designated for transit projects, including $75 million from the Federal Transit Administration’s Small Starts Program.

On weekdays, sbX operates from 5 am until 11 pm with 10-minute frequency during peak morning and afternoon hours.  Weekday mid-day and early evening sbX frequency is 15 minutes; early morning and late evening frequency is every 20 to 30 minutes.   Omnitrans introduced sbX Saturday service in January 2019, with buses running every 20 minutes between 6 am and 9 pm. Complete sbX route and schedule information is available at: sbx-green-line