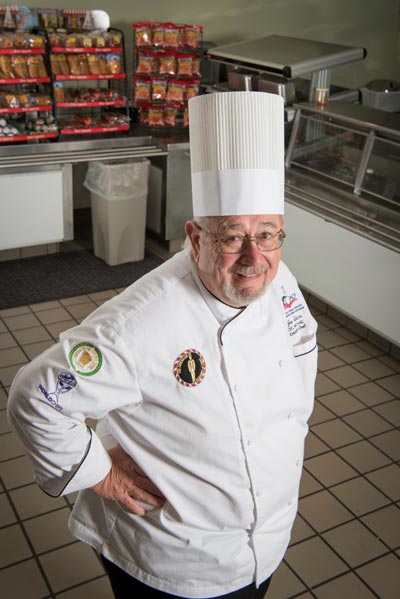 “We are very proud of Chef Eidem and his accomplishments,” said Hospital Director, William Gilbert. “Arrowhead’s staff knows how good he is, but it is nice to see that he is recognized by the American Academy of Chefs for his significant achievements.”

Chef Eidem will be attending the annual American Academy of Chefs Fellows Meeting on July 17, 2018, in New Orleans, Louisiana, where he will be inducted as a member of the Culinary Hall of Fame.

Chef Eidem has been actively involved with the American Culinary Federation for more than 30 years. During his career, Chef Eidem has owned an Italian restaurant and has hosted a television cooking show. Currently, as Arrowhead’s chef, he serves more than 2,200 meals each day. Chef also hosts regular Lunch & Learns featuring seasonal dishes made with ingredients from the Farmers Market, held weekly on the hospital campus. His next Lunch & Learn is at 11:30 a.m. on July 11 in the Oak Conference Room at ARMC (400 North Pepper Avenue in Colton). Chef Eidem will demonstrate how to make summer dips including Pimento Cheese Dip, Volcano Dip, Homemade Hummus, and Pineapple Black Bean Guacamole Dip.

Chef Eidem has received many awards including, “Most Professional Chef in America,” by the ACF in 2006. In July 2007, he was inducted into the Royal Order of the Golden Toque. He has also received the Antonin Crème Medal; the ACF Presidential Medallion; the AAC Regional Chairs Award, and was the ACF Western Regional Chef of the Year. Chef Eidem is also a distinguished Fellow in the World Master Chefs Society of Europe. He has authored two books.

About Arrowhead Regional Medical Center:  ARMC is a 456-bed university-affiliated teaching hospital licensed by the State of California Department of Public Health, operated by the County of San Bernardino, and governed by the Board of Supervisors. The hospital, located on a 70-acre campus in Colton, California, operates a regional burn center, level II trauma center, primary stroke center, a behavioral health center, five primary care centers, and provides more than 40 outpatient specialty care services. ARMC is helping to achieve the Countywide Vision by addressing the community’s wellness and educational needs. Follow ARMC on Twitter at @ArrowheadRMC and on Facebook at www.facebook.com/arrowheadregional.