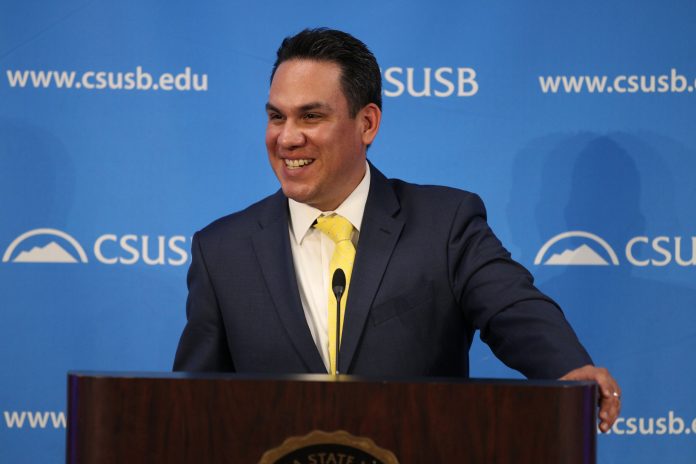 Rep. Pete Aguilar (D-San Bernardino) and California State University, San Bernardino (CSUSB) announced Friday that two students attending CSUSB have been selected to receive scholarships as part of the Department of Defense’s (DoD) Information Assurance Scholarship Program (IASP). The scholarships were made possible by Rep. Aguilar’s amendment to H.R. 1301, the Department of Defense Appropriations Act for Fiscal Year (FY) 2017, which was signed into law earlier this year and appropriated $5 million for the program, after years of DoD underfunding and attempts to phase out the program.

“This scholarship program is about increasing our country’s cyber readiness while also training students for the jobs of the 21st century,” said Rep. Aguilar. He continued, “Cal State San Bernardino has a first rate cyber program, and I’m proud that these scholarships are being used to elevate students from our community. Thanks to the IASP program, students from right here in the Inland Empire will be on the front lines of the cyberwarfare that’s defining our modern defense capabilities.”

“This program is of utmost importance to recruit people to defend our nation and economy in cyber space. The fact that two students from CSUSB were selected from a large national pool is a great honor,” said Tony Coulson, a CSUSB professor of Information and Decision Sciences and director of the university’s Cyber Security Center. “I also commend Congressman Aguilar for working hard to restart such an important program for the benefit and security of the nation.”

The scholarships, awarded by the Department of Defense, will cover full tuition, a $30,000 annual stipend, a paid summer internship with a federal defense agency, and civilian employment with the Department of Defense upon graduation. Strengthening our cybersecurity capabilities is a top priority for Rep. Aguilar, who is a member of the House Cybersecurity Caucus. In addition to the $5 million he secured to restart the IASP, Rep. Aguilar has also passed legislation to establish a critical cyberwarriors pilot program within the US Army and Air Force.

Students’ names withheld due to national security aspects of the scholarship.