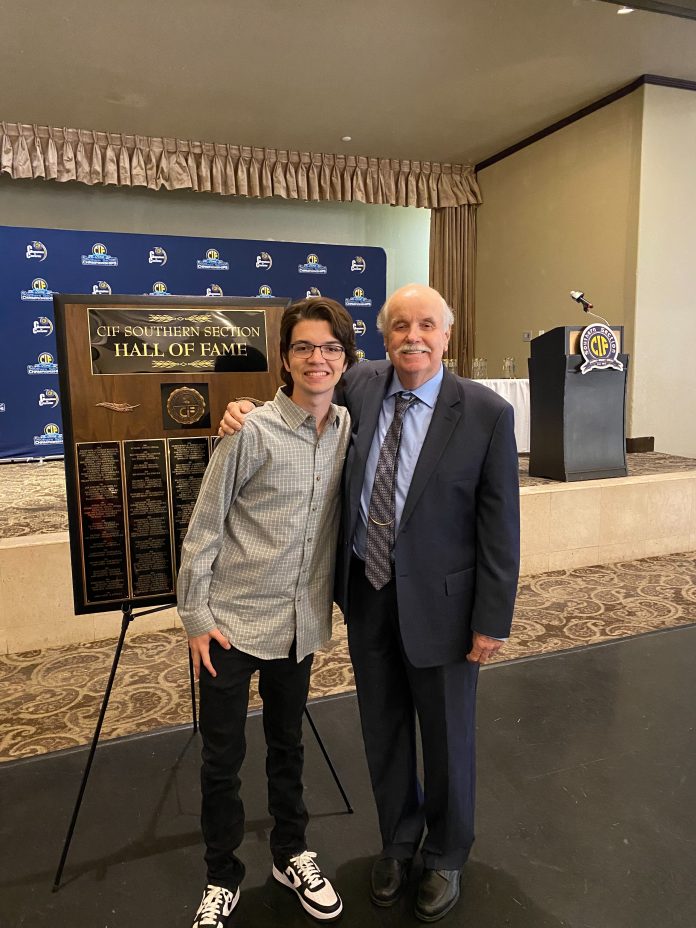 Last week, former Chino High School head baseball coach, and my grandpa, Bob Sheehan was inducted into the CIF Southern Section Hall of Fame. The ceremony was held in Long Beach, and I was there to witness the event and see Sheehan and the many other great former high school coaches get their names immortalized in the high school sports world.

The event began with a brief introduction from CIFSS commissioner Rob Wigod as he welcomed everyone to the event and lunch was served. After some time was given for everyone to eat, the induction begin. First up was the Distinguished Service awards for those who had served many years, mainly as committee members and trailblazers for their respective sport(s). Award winners were greeted with plaques and, of course, a huge round of applause from the audience.

Immediately following the award presentations, the Hall of Fame ceremony began. Each honoree had a 3-5 minute pre-recorded video of them giving thanks to the people that helped get them here as highlight tapes and pictures from their coaching careers played in the background. In addition to this, one Hall of Fame committee member also read aloud the list of accomplishments each coach had. For Bob Sheehan, these stats included 46 years total coaching high school baseball at multiple schools (Chino, Beaumont, Arrowhead Christian) and an overall record of 601-359-3 which included an impressive 482-247-3 record at Chino High school alone. Sheehan also made 2 CIFSS playoff semifinals to go along with 7 league championships. To top it all off, he was Athletic Director at Chino for 20 of his years there.

All Hall of Fame Members had their name inscribed on a giant plaque, and each individual received their own plaque with their name on it as well as a ticket giving them lifetime free admission to any future CIFSS event. After all the members were announced, one final group photo was taken before the luncheon was dismissed and the festivities were over.

Congratulations once again to my legendary grandpa, Bob Sheehan, and all of the other members of the CIFSS Hall of Fame class of 2022. It is not often so many legendary members of their craft are in one place, and it sure was special to see.