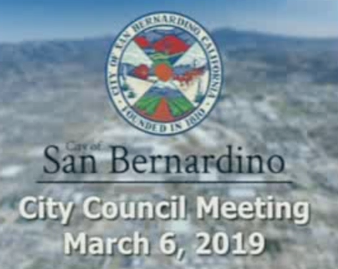 In a 6-0 vote the San Bernardino City Council approved the authorization to issue a request for proposal for a survey research firm and a strategic communications and public education consultant to assist with the impending sunset of the Measure Z, $0.25 Sales Tax, in April 2022.

“Measure Z was the 25-cent sales tax approved by the voters in 2006 and went into effect on April 1 per the ordinance in 2007 and raised the sales tax rate from 7.75 percent to 8 percent,” said Teri Ledoux, Assistant city manager.

“Since Measure Z began collection in April 2007, it has generated $80 million. This fiscal year we anticipate it will bring in $8.8 million,” continued Ledoux.

“This would be a devastating loss. We want to put this back on the ballot to increase the measure or keep it the same during the next general election in 2020,” Ledoux said.

The city staff also wants to hire a polling company and an education research firm to get the Measure Z process started.

“I can tell you, we do not need a survey research, we know what people are going to say. But, we do need to conduct public education and inform the voters on how this is going to effect safety and their taxes,” said Council Member Sandra Ibarra.

During the discussion Mayor John Valdivia shared that the council has the sole discretion to task the scope of Measure Z.

“The city of Riverside and several other cities passed a general sales tax and garnered almost $60 million in annual revenue budgets; creating a stream of money coming into the city of Riverside. These are important discussions we will continue to have,” said Valdivia.

Ybarra said, “Just the fact that you are trying to compare us to Riverside, if you look at the medium income, San Bernardino does not compare to Riverside. I know in my area people do not want to get any more taxes and they don’t feel safe; which is why I say the education is going to be key if we want to pass or renew Measure Z again.”