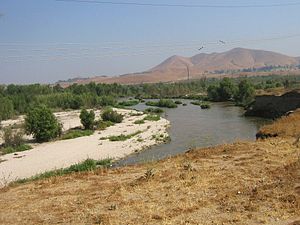 President Donald Trump on Tuesday signed new legislation into law that will promote the ongoing expansion of sensitive habitat areas and water storage, while establishing appropriate areas for mining operations that provide $36 million in payroll annually to the region.

The Santa Ana River Wash Plan Land Exchange Act clears the way for the Bureau of Land Management to exchange land with the San Bernardino Valley Water Conservation District under regulations in the Federal Land Policy and Management Act.

The 4,500-acre Wash Plan was developed over many years by a local Wash Plan Task Force made up of the cities of Highland and Redlands; the SBVWCD, East Valley Water District, and San Bernardino Valley Municipal Water District; CEMEX, Robertson’s Ready Mix; the U.S. Fish and Wildlife Service, California Department of Fish and Game, Inland Valley Development Agency and the Endangered Habitats League.

Several task force representatives attributed the long-awaited success of the legislation to the teamwork involved in making it happen.

“This legislation is an important step in helping local efforts that are good for the environment, good for the local water supply, and good for business and jobs in our region,” said Daniel Cozad, general manager of the San Bernardino Valley Water Conservation District.

San Bernardino Valley Water District General Manager Douglas Headrick said the new law will allow partner agencies to move forward with plans to optimize land use in the wash for the benefit of all interests.

“Valley District has worked alongside other task force members for many years to support the land exchange, which will open the door to a whole host of opportunities including critical water projects to enhance groundwater storage, and expanded habitat for native and threatened species,” Headrick said.

The next step in the process, he added, is for the Bureau of Land Management to approve the Environmental Impact Study that has been in process for years to implement this Act of Congress.

Cozad called its passage collaboration at its best.

“It shows that it is possible for both sides of the aisle and both houses to work together to help the communities they serve,” he said. “We really appreciate the work of everyone involved in bringing this legislation to life.”

Rep. Cook called the Wash Plan a win for the economy and a win for the environment. “This will align local land ownership with appropriate uses, setting aside already disturbed land for aggregate mining and setting aside important habitat for conservation purposes,” he said.

“The Wash Plan will empower industries to take root and flourish, continue investments in our transportation and infrastructure, and preserve our environment and regional wildlife. This is an important step forward for our communities,” he said.

Cozad said the land exchange will lead to more protection efforts for habitat, improved connectivity in the wildlife corridor, expanded water storage capacity, and the future establishment of public access and trails which, once built, will connect and help complete the Santa Ana River Trail.

“This project has been 15 years in the making,” Cozad said. “Doing a Habitat Conservation Plan with this many seemingly conflicting interests is unusual, particularly when you consider each has a different mission to implement.”