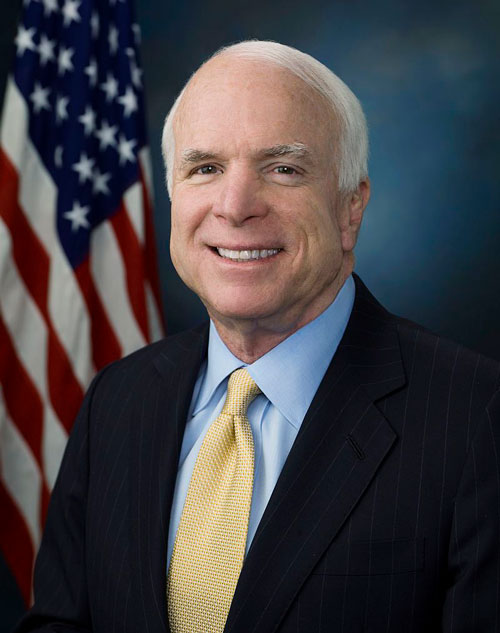 I’ve been a newspaper columnist for about thirty-five years. There is a significant difference between a reporter and a columnist. A reporter deals with facts in reporting, the news. A columnist most often shares his or her opinions-which I do.

In addition, I try to support my opinions with facts. In that case I become a quasi-reporter. Therefore, for this article I am a columnist/reporter.

I will express my opinions about three topics: Immigration, John McCain, and the U.S. Embassy in Israel.

Everyone in our country is an immigrant. They came themselves, or because of their parents or their grandparents.

History records Leif Erickson from Norway, came to Canada 200 years before the Pilgrims to Boston, the British to Jamestown and the Spanish to St. Augustine, Florida. They were all immigrants.

Even Native Americans were immigrants. The Athabascans came from Serengeti, Africa, through Siberia over the Siberian land bridge to Alaska, then through Canada, the United States, Central and South America.

Their descendants are about 500 tribes in the U.S. today.

That includes Presidents from George Washington to President Trump.

President Trump’s mother immigrated from Scotland. She was not an animal. Two of his wives came from third world countries. They are not animals.

The vast number if immigrants are honorable and work hard. A very few are animals. In my own family there was one alcoholic, one was drunk and killed a man in a brawl. I also know four were professors, two were doctors, six were farmers and two were lawyers. Several fought in World War II, or the Korean Conflict or Vietnam.

I consider John McCain as a hero. He spent several years in a Vietnam prison and was brutally beaten. He refused to leave when the enemy offered him freedom. He refused unless all American prisoners were released.

He is on the verge of dying from a brain cancer yet speaks his mind against the evil behavior of President Trump. I remember, vividly, of him taking the microphone from a person who spoke ill of President Obama. McCain challenged her and defended Obama as “a good man.”

Trump said he was not a hero because he had not died. Yet, Trump avoided the draft five times. Saying he had a bone spur on his heel, yet at the same time he played football, and soccer. Phony is the word. In speaking of Trump, John McCain writes, “He is a would-be autocrat who craves flattery, has only a reality show, facsimile of toughness and doesn’t understand American ideals.” He has strongly stated that he does not want Trump at his funeral.

Two phrases he wrote that describe him. “In prison, I fell in love with my country. It wasn’t until I had lost America for a time that I realized how much I loved her.”

And, “Americans never quit. We never surrender. We never hide from history. We make history.”

My final opinion is about the problems in Israel. I have visited there eight times and have traveled over the country from Mt. Herman in the north to Egypt in the South. I’ve been to Gaza several times and seen the problems of the Palestinians.

I’ve walked around the entire area of Old Jerusalem. I’ve fished the Sea of Galilee and seen the tomb from where Jesus raised Lazarus from death. I even went swimming in the Mediterranean Sea and visited Tel-Aviv from end to end.

I’ve prayed at the Wailing Wall and worshiped with Muslims at the Al-Aqsa mosque. I’ve been to Bethlehem numerous times and seen the place where Jesus was supposedly born.

I’ve been to Masada and the city of Jericho. I’ve spent considerable time in the City of Nazareth, the hometown of Jesus.

Jerusalem has been the sacred city for Jews, Christians and Muslims. To do what Trump did is causing trouble that pleases the “fundamentalists” and radical Christians. One of the ministers that participated in the service the other day said, “All Jews are going to Hell.”

The two pro-Israel ministers are both from Texas. Rev. Robert Jeffress is pastor of the First Baptist Church in Dallas, and the Rev. John C. Hagee is a televangelist from San Antonio.

In supporting Israel, they and their followers believe they should support Israel to help fulfill the biblical prophesies about the second coming of Christ. In effect, a nuclear war with Iran and other Muslim countries will do that.

Amen Selah. So be it.